Records advice from the royal commission

Inadequate records and recordkeeping have contributed to delays in or failures to identify and respond to risks and incidents of child sexual abuse and have exacerbated distress and trauma for many survivors. Obstructive and unresponsive processes for accessing records have created further difficulties for survivors seeking information about their lives while in the care of institutions. (Volume 8, p.9)

In order to address the impact of poor record keeping on children in out of home care, and to assist those who were in ‘care’ as children who are now seeking records, the final report of the commission includes a number of recommendations.

The commission also recommends that all records relating to abuse should be kept for a minimum of 45 years, to take into account the time it can take for people to come forward about abuse.

The commission identified that inadequate records and recordkeeping have contributed to survivors’ lack of information about their childhoods and frustrated their abilities to take legal action or apply for redress. It acknowledges the anger, frustration, distress and trauma that records (and their absence) can have for survivors.

The commission highlights how problems with records and recordkeeping were raised in “virtually all of the royal commission’s case studies, as well as our private sessions” (Volume 8, p.39). The report summarises the range of issues relating to records:

The Volume highlights the impact that the lack of records has on survivors, including not having key identity documents such as birth certificates; not having any evidence of being in a particular institution during their childhoods; and no records about abuse, even when the abuse had been reported.

Survivors reported examples of minimal records being created, despite being in out of home care for long periods of time. Information about why they were initially placed into ‘care’ was inaccurate or misleading, and made judgemental comments about their families.

The report highlights the importance of properly maintaining records after their initial creation, and notes that many organisations have vast quantities of records but because of poor maintenance, “their content is unknown” (Volume 8, p.50). It highlights initiatives such as the Find & Connect Records Access Documentation grants as a way for organisations to improve access to their records.

The report notes that, “In our view, it is clear that many historical records were destroyed with little consideration of their potential future relevance or use, or the significance of the records to the individuals discussed within them.” (Volume 8, p.53)

Access to records was also mentioned as a key issue around recordkeeping. These issues include:

The report places a strong emphasis on sharing information about abuse between institutions and governments to “identify, prevent and respond to incidents and risks of child sexual abuse” to prevent perpetrators being moved between institutions where they can harm more children. It would also share information about children and students, to provide support to those who have been abused, and also to acknowledge that some children may pose a risk to others.

This focus is in large part due to the testimony and advocacy of Care Leavers and Forgotten Australians. Those children were not believed, abuse routinely covered up and abusers moved elsewhere, driving a strong desire to ensure that safeguards be put in place for those experiencing out of home care in the future.

Currently, state and federal governments have different laws, and there is confusion around how to implement them. The commission recommends a “nationally consistent scheme for sharing information related to the safety and wellbeing of children between key agencies and institutions to improve information exchange within and across different sectors and jurisdictions.” This would address that confusion, and strengthen safeguards for children.

Individuals whose childhoods are documented in institutional records should have a right to access records made about them. Full access should be given unless it is contrary to law. Specific, not generic, explanations should be provided in any case where a record, or part of a record, is withheld or redacted. Individuals should be made aware of, and assisted to assert, their existing rights to request that records containing their personal information be amended or annotated; and to seek review or appeal of decisions refusing access, amendment or annotation. (Volume 8, p.103)

It is important that agencies responsible for screening, authorising and supervising carers – whether non-government out-of-home care service providers or government agencies – are able to obtain sufficient information to assess and manage risks of child sexual abuse in out-of-home care context. (Volume 8, p.18)

Out-of-home care continues to be an area of potentially high risk for institutional child sexual abuse with inappropriately authorised carers posing significant risks for children in out-of-home care. The royal commission recommends creating jurisdictional carers registers, based on a nationally consistent set of minimum features, ensuring the people who can care for children are subject to greater regulations. The registers would facilitate more proactive and routine information exchange between:

Volume 11 provides an overview of survivor’s experiences from the private sessions, public hearings, written accounts and research, of child sexual abuse in residential institutions from World War II to 1990. It includes many individual quotes and accounts and specifically mentions the experiences of Forgotten Australians, Aboriginal and Torres Strait Islander children, Child Migrants and children with a disability. While most of the institutions have now closed, the royal commission acknowledges that for the survivors of these institutions the impact remains. Family re-unification is also impacted heavily by the failures in records and record keeping, both historical and present-day.

Many survivors said they needed support to access their records and information, including information about their birth families. (Volume 11, p.15)

Lack of supervision and oversight extended to matters of recordkeeping. Many survivors told us that incomplete or redacted records made it difficult for them to access information about their lives and seek redress from the institution.”‘Tommy James’ told us that the nuns were ‘a bit blasé’ about spelling and he ended up with four different surnames, which may have contributed to his mother being told he had died. ‘Alf Terry’ explained the importance of accurate and informative records in coming to understand his childhood. He said: One thing that quite disturbs me is the lack of information in my ward file … I can’t remember, for the life of me, the people’s names … I don’t know all the things that were done to me … Was I a bad seed to begin with? … I’m close to … topping myself … all the time … Depressed? Very much so … I think I’d describe it as a shadow and it’s always present. This effect on you is [always there]. ‘Ken Peter’ said that when he received his records he was stunned to realise how much information was missing about his health or schooling. He said, ‘you get nothing … so you’ve got no records of any of this’. (Volume 11, p.97)

Survivors explained there were delays in receiving files after making a request, they received incomplete and/or heavily redacted files, or they were told files had been destroyed. They had received little or no support from the institution. (Volume 11, p.154)

Survivors and their family members commonly said that finding out their family’s history with the care system was important in preventing children going into care in the future. (Volume 11, p.154)

Many survivors of sexual abuse in historical residential institutions told Commissioners that they needed support to access their records, including information about their birth families. Some had been unable to access information about their families or had found the experience traumatic. Survivors told us access to records affected how they were able to reconnect with family. For some survivors, such as child migrants, it could involve travelling overseas. For Aboriginal and Torres Strait Islander survivors recordkeeping has been important to restoring and making connections with culture and family. For many, failures in accurate recordkeeping have hindered restoration of community relationships. Some survivors and organisations that support survivors shared stories of poorly supported family reunions that had been distressing for survivors and their families. Survivors suggested services be funded to support all care leavers to identify and contact family members. (Volume 11, p.153)

Other recommendations relating to Care-leavers:

The Australian Government should establish and fund a legal advice and referral service for victims and survivors of institutional child sexual abuse. The service should provide advice about accessing, amending and annotating records from institutions, and options for initiating police, civil litigation or redress processes as required. Support should include advice, referrals to other legal services for representation and general assistance for people to navigate the legal service system. 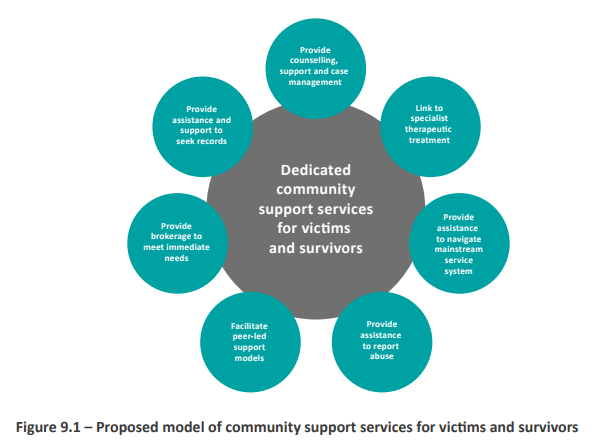 The royal commission website has become an important resource for those who experienced institutional ‘care.’ It holds their stories, their voices, and for many records the first time they spoke of, and were believed about, their abuse.

As such, the commission has recommended that:

The Australian government should host and maintain the royal commission website for the duration of the national redress scheme for victims and survivors of institutional child sexual abuse.

It is important for a number of reasons, that the government agency that becomes the custodian of the royal commissions’ records should maintain ongoing access to records that contain information given by survivors.

While each individual has unique support needs, additional needs emerge from the shared experiences of groups of survivors. As discussed in Volume 8, Recordkeeping and information sharing, care-leavers (those who have spent time in institutional care or out-of-home care as a child or youth, or both) may require assistance to access their records and, where appropriate, to seek to amend or annotate records. In addition, submissions to Issues paper 10: Advocacy and support and therapeutic treatment services (Advocacy and support and therapeutic treatment services) stressed that many Aboriginal and Torres Strait Islander survivors sought assistance with reconnecting to culture, family and community, as part of healing. (Volume 8, p.32)

In addition to social and health services, victims and survivors may engage with child protection, police and legal services for issues such as reporting their experience of abuse or accessing historical records. The mental, physical, social and economic impacts of abuse can compound the difficulty of navigating already complicated service systems and processes. Services often hold a great deal of authority over the people with whom they interact, which can exacerbate fears victims’ and survivors’ may already hold arising from their experiences of child sexual abuse in institutions. (Volume 8, p.33)

Care-leavers are another group that has particular assistance needs. The Care Leavers Australasia Network (formerly Care Leavers Australia Network) told us that access to records was an important issue for care-leavers and that care-leavers faced a range of issues in obtaining records. We were told that challenges facing older care-leavers in accessing records were compounded by literacy issues arising from educational deprivation. In addition, we heard of the negative impact on survivors when elements of their personal records had been redacted. (Volume 8, p.34)